From tax reform to a changing global landscape, these are the major forces affecting the economy in the coming year.

The economy is entering 2018 in a sweet spot: Unemployment is at a 17-year low and the stock market’s record-setting bull run created more than $7 trillion in new wealth last year, generating a surge in consumer spending. Despite years of above-trend growth, inflation remains tame, a likely sign that the current business cycle still has room for further expansion.

In 2017, the current recovery became one of the longest running in recent history—most business cycles average around six years in length. Despite this, many indicators suggest there may still be room for expansion into 2018 and beyond.

Now, 2018 looks like it may push the economy still higher, beyond what many assumed was possible. US GDP growth is forecast to be between 3 and 4 percent this year, bolstered by growing exports, stabilizing energy prices and rising consumer spending.

These are the six key factors that could shape the economy’s development in the coming year:

Growth across the industrialized world is finally gaining momentum and is forecast to accelerate even further in Europe and Japan. Global GDP is projected to expand at a 4 percent rate in 2018, up from the 3.75 percent estimate for 2017.

The European Union’s above-trend growth rate in 2017 gave the European Central Bank enough confidence to begin talking about normalizing monetary policy, and political risks to the currency union seem to be fading. Japan’s economy has also strengthened as stimulus from quantitative easing and negative interest rates began to take hold.

Stronger growth across the developed world should be good news for American businesses. Not only do wealthy European and Japanese consumers represent a large market for US exports, but the tapering of quantitative easing abroad is also expected to restore balance to currency exchange rates, making American goods more competitive overseas.

In the developing world, India is projected to grow faster than China for the first time in 25 years. This is a sign of the maturation of the Chinese economy, which is shifting away from export-focused manufacturing as a service-based consumer society emerges. The rise of China’s middle class could create a large market for foreign goods, bolstering demand for American technology and intellectual property.

Oil prices are stabilizing, and the resurgence of drilling should boost capital spending in American oil patch towns. The global oil glut temporarily halted the domestic shale boom, but improvements in horizontal drilling technology have made exploration in many of America’s oil fields profitable—even at current prices.

The US became the world’s top fuel exporter in 2016, and the nation’s refineries should continue to ramp up production in 2018. Global vehicle sales reached 94 million in 2016, suggesting strong future energy needs. Despite improvements in fuel efficiency—and the rapid emergence of electric technologies—the world’s growing demand for fuel is expected to keep energy prices firm in the coming year.

This year will see the implementation of far-reaching legislation that will overhaul almost every aspect of the federal tax code. The immediate impact of tax reform will be to cut federal revenues by $205 billion in 2018, leaving more money in consumers’ hands. This should support faster growth in the near term, adding possibly a full percentage point to the rate of GDP expansion this year.

The longer-term effects of the legislation are more difficult to predict. If businesses accelerate the pace of capital investment in response to new incentives, the bill could have a substantial and lasting impact on economic growth. But there is little historical precedent to inform predictions, and the bill’s true consequences will continue to unfold over the next decade.

The Tax Cuts and Jobs Act permanently reduces the corporate tax rate—from a structure that caps out at 35 percent to a single 21 percent rate—giving businesses a clearer picture of the policy outlook. This could lower the effective tax rate from 25 percent to near 21 percent. 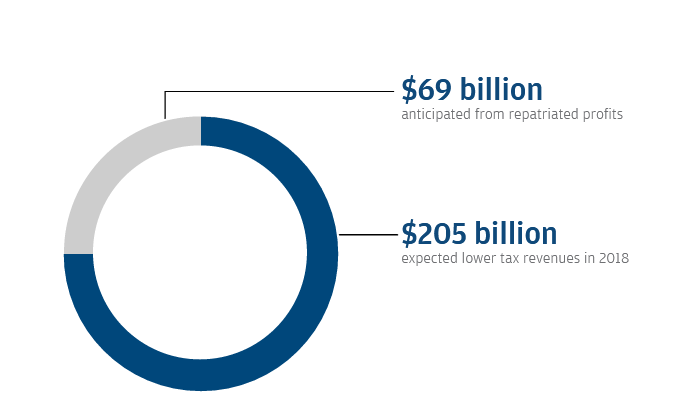 The tax initiative is expected to lower tax revenues by $205 billion in 2018, not counting the $69 billion anticipated to be raised from repatriated profits. This should put more money in the hands of consumers in the coming year.

Natural disasters may have shaved as much as half of a percentage point from GDP growth in 2017, but the rebuilding efforts in Texas and Florida promise to generate a surge of activity in the coming months. While the productivity lost as a result of the hurricanes can never be recovered, repairing the storms’ damage should provide a tailwind for the construction sector through the winter and spring.

America’s headline unemployment rate has fallen to a level consistent with full employment, and 2017 saw the nation’s involuntary part-time workforce virtually disappear. However, approximately 1.5 million prime working-age people are still missing from the labor market. These workforce dropouts are slowly returning as opportunities arise, but the economy could sustain above-trend job creation for some time before the workforce participation rate for young people returns to its pre-recession norm.

Most economists consider “full employment” to be when the unemployment rate falls below 5 percent—a threshold under which the US unemployment rate sat throughout all of 2017. Due to slack in the economy and returning workforce dropouts, that rate could fall even lower in 2018.

Much like in 2017, the aging US population could continue to restrain the growth of the workforce in 2018. Prior to the last decade, the workforce was adding some 200,000 new workers every month; as the baby-boom generation retires, the workforce’s monthly rate of expansion has slowed to below 125,000.

The forecast of faster growth over the next several years amid this slower-growing workforce should translate into faster labor productivity growth, breaking a decade-long spell of measured productivity. This flies in the face of the consensus but would begin to explain why we see innovation everywhere but in the metrics.

Overall, 2018 will undoubtedly bring surprises and unexpected headwinds. But the combination of strong global growth, low inflation and an accommodative monetary policy should support continued expansion. As the recovery nears completion, American households should enjoy the benefits of a competitive labor market and rising asset prices throughout the year.

Why Commercial and Industrial Lending Is Due for a Comeback

Pricing in a Bright Future for Equities

A Look Back at 2019 and the Economy's New Normal