But the pandemic plus work-from-home are creating winners and losers—for now. Home buyers: Proceed with care.

It’s too soon to know if working-from-home will remain an option for millions of American workers once the COVID-19 crisis ends. More immediately, though, the nationwide jump to remote working has resuscitated a U.S. housing market that had been uninspiring since the 2008 global financial collapse.

If you are one of the many people now interested in buying, selling or investing in real estate, you may want to act quickly. But look very carefully at the market before you leap. Also, be sure to ask your J.P. Morgan team to help you evaluate how buying a new home aligns with your goals and may affect your taxes.

While the housing market has generally avoided the economic devastation other industries face during the pandemic, complex dynamics are at work. Indeed, there are some clear winners and losers:

“Safety” zones—Home prices are going up sharply in the suburbs as well as in smaller U.S. cities as workers flee dense urban centers. 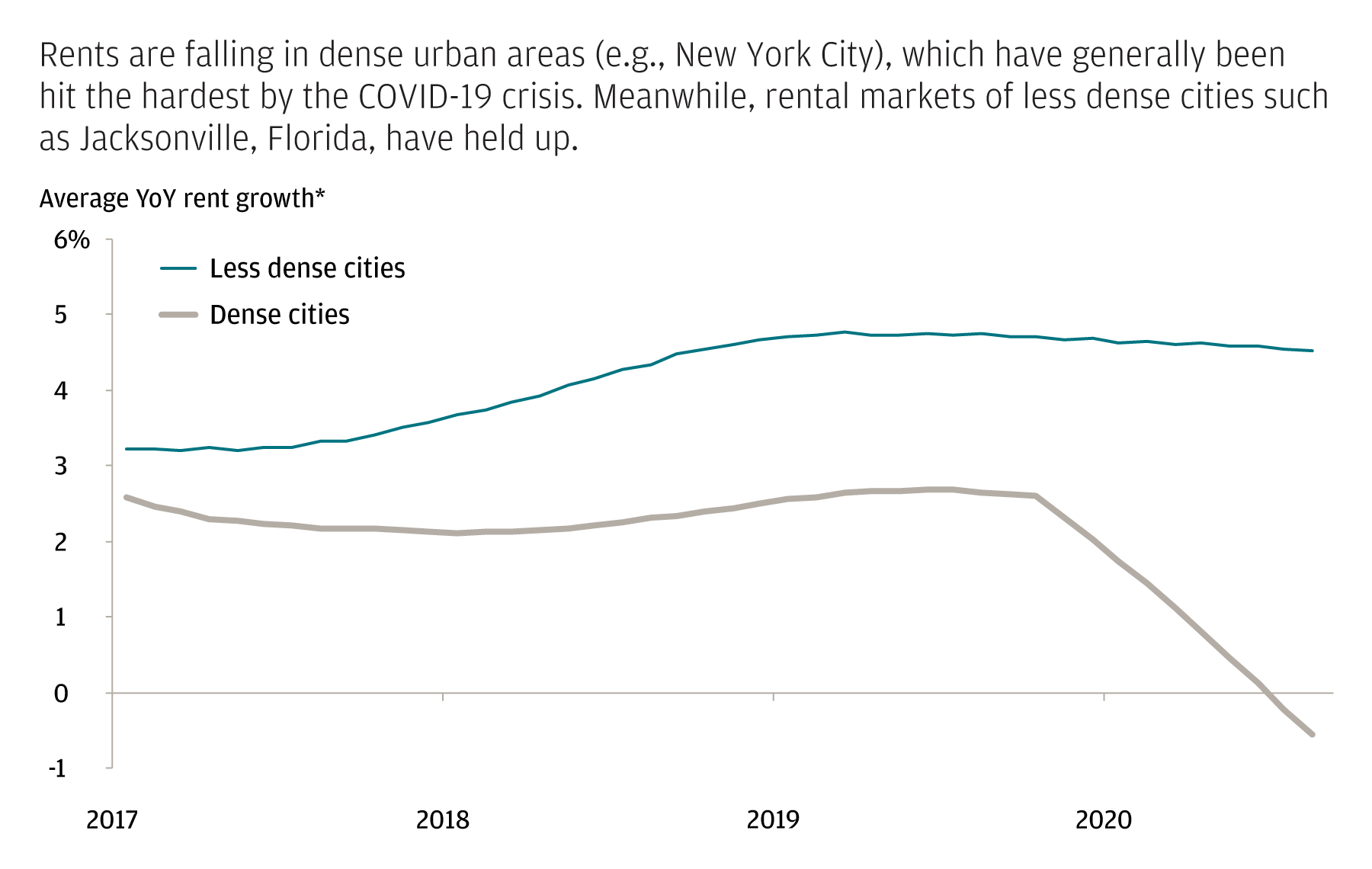 Power purchasers—The overwhelming majority of homebuyers are people with pristine credit scores (+760 FICO) and have jobs that are allowing them to weather the COVID-19 storm by working from home. 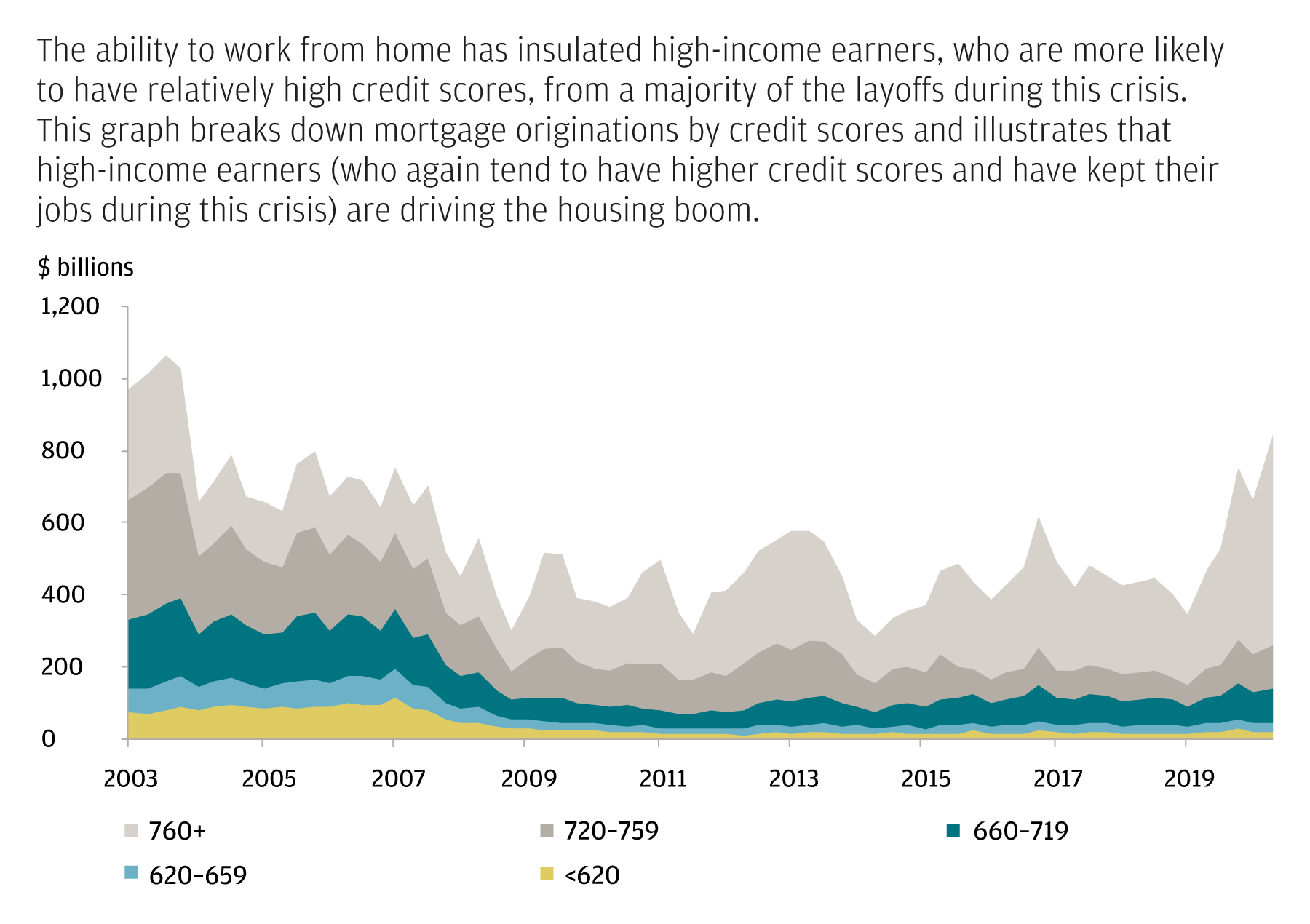 Chart that correlates high income and FICO scores in the US

Renter pain points—The lack of a federal stimulus package could create a wave of evictions for renters across country.  Also, workers in service-oriented sectors (hospitality, travel, retailing)—unable to work from home—have borne the brunt of nationwide layoffs. These workers tend to have lower incomes and weaker credit scores. They also tend to be renters not home owners.

The popular narrative is people are fleeing large urban areas and moving to the suburbs—and beyond.

However, the truth is more nuanced: As yet, we don’t know if moves out of the city will be permanent—or if big city flight will accelerate. At the moment, the vast majority of workers in dense metro areas continue to work away from their employers’ offices. In New York City, for example, more than 90% of office workers are remote, according to The New York Times. 1

Also, much depends on whether or not the companies that have invested so heavily in the digital technologies that made remote work possible will revise their business models and real estate plans going forward.2 What we know for certain—in 2020 there has been a surge both in home sales and property prices in the suburbs surrounding urban centers.

In these two markets and other big coastal cities, home prices are weakening at the urban core and gathering strength in the surrounding suburbs. Seemingly, many people expect the future will allow more flexible work arrangements, enabling them to live a bit further away from their city offices.

But don’t count out the large city centers just yet.

Amazon and Facebook are still betting on the Manhattan real estate market. According to The New York Times, Facebook has acquired more than 2.2 million square feet of New York City office space for thousands of employees in less than a year, all of it on Midtown Manhattan’s West Side between Pennsylvania Station and the Hudson River.3

As a point of comparison: In the wake of the 9/11 terrorist attacks, record numbers of New York City residents—and companies—fled the Big Apple. Two years later, however, jobs and workers started returning to Manhattan. In fact, over the next 15 years, employment grew faster in the urban core than in the suburbs, according to the U.S. Labor Department.

Move to the suburbs* 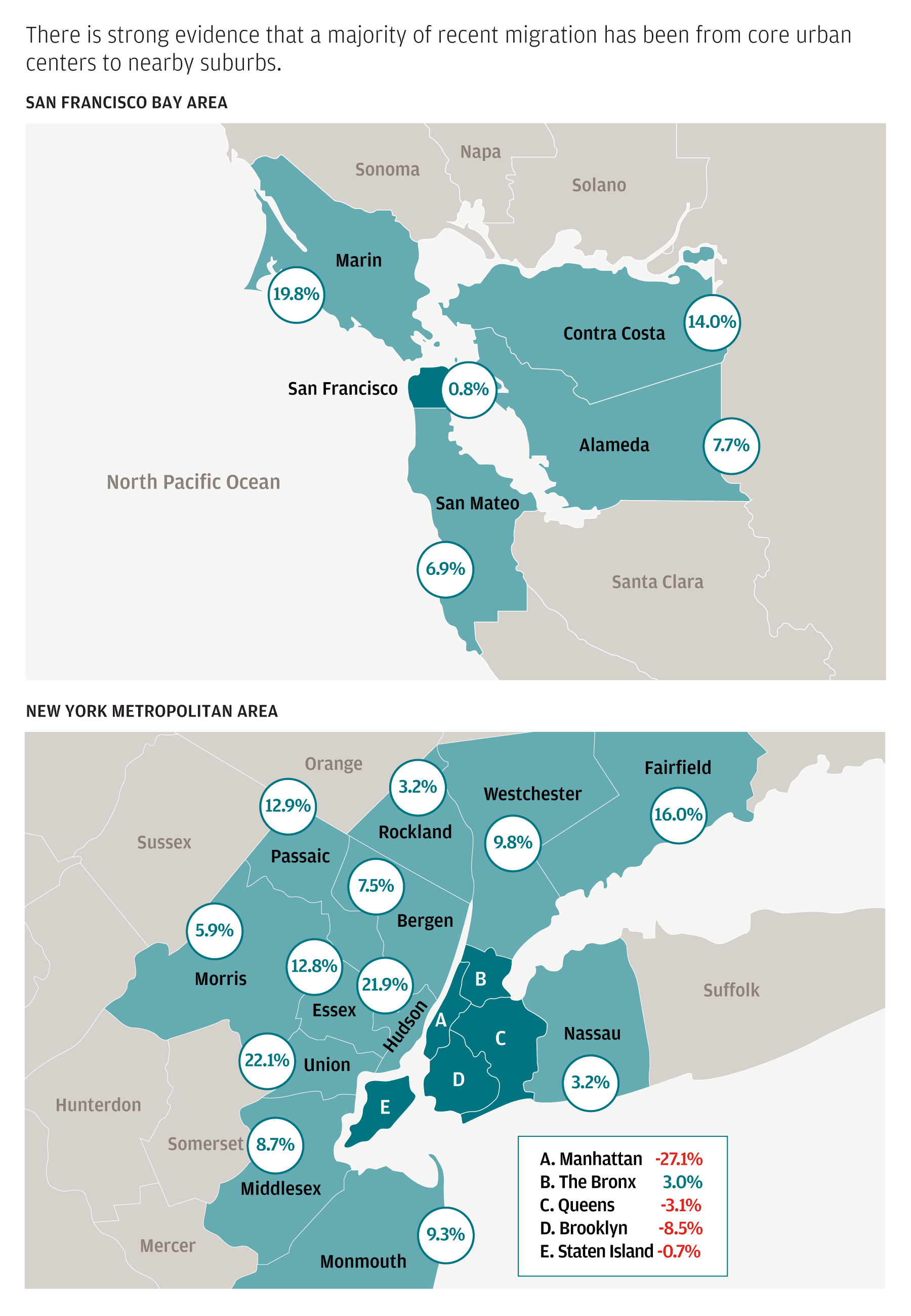 If you are interested in purchasing residential property right now, consider:

Importance of structuring and planning

Following a move, how you structure new property can help improve your overall financial and estate plan and move you closer to your goals. Your J.P. Morgan team can help you address privacy, timing, and/or tax issues that might arise. And if you’re considering a move out-of-state, we can help you understand what that might mean for your estate plan and what actions you can take for a successful move.

If you are weighing an out-of-state move, we can help you evaluate how a change of residency might impact your estate plans or trigger tax and other considerations.

1.The New York Times, September 8, 2020. Manhattan’s Office Buildings Are Empty. But for How Long?
2.To read more about the accelerating digitization of the U.S. economy, click here: https://privatebank.jpmorgan.com/gl/en/insights/investing/fintech-poised-to-disrupt-20t-financial-services-industry
3.The New York Times, August 3, 2020. Silicon Valley’s Newest Rival: The Banks of the Hudson
4.To learn more about liquidity-based borrow strategies, click here: Why is now a good time to borrow? 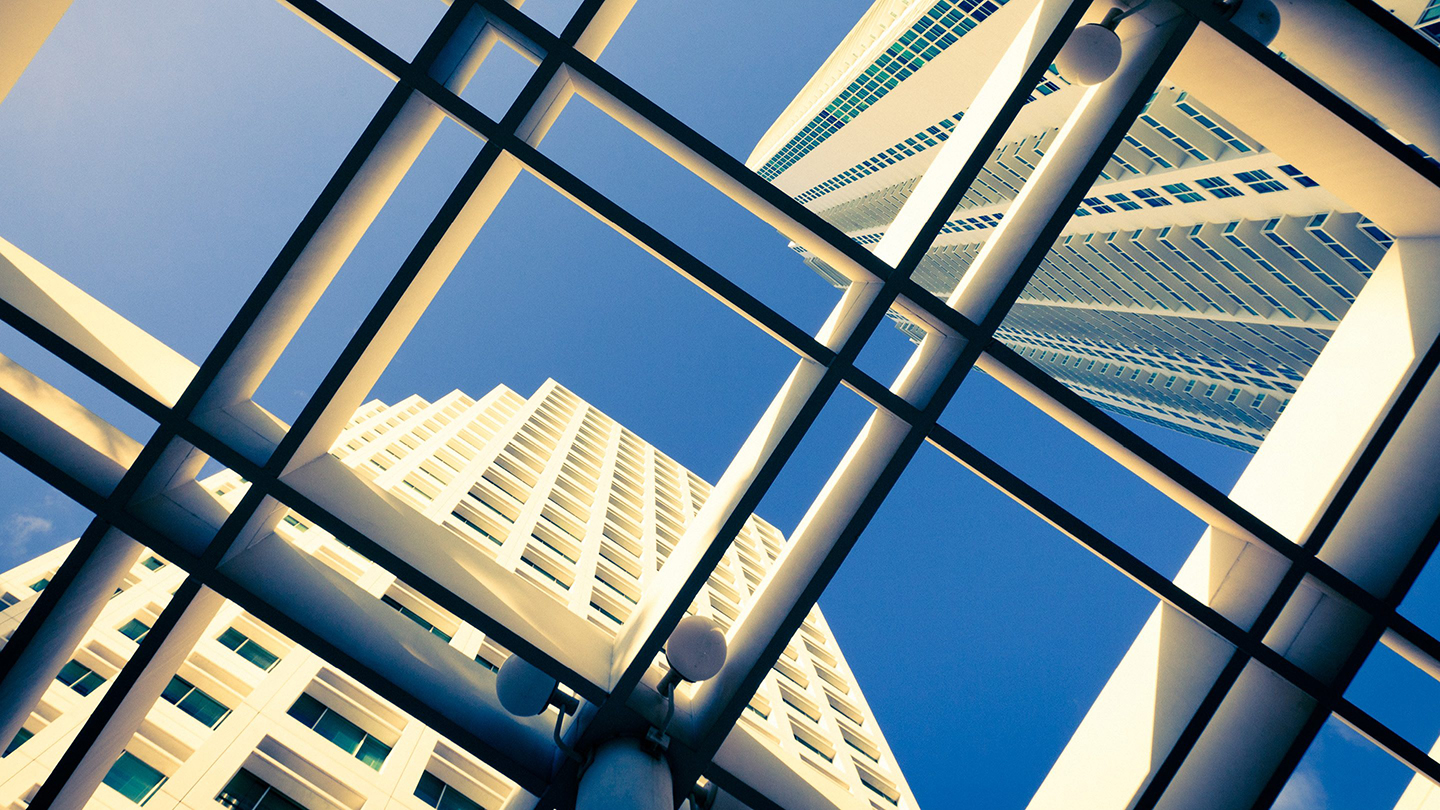 Love and Money: How to Create Healthy Money Habits with a Partner

How to include your grandchild in your financial plan

Losing a loved one: Tasks you may not want to delay